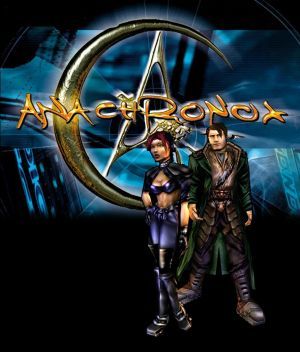 Anachronox is a third-person RPG from 2001, developed by Ion Storm Dallas (infamous for Daikatana; the Deus Ex team was Ion Storm Austin) for the PC. A sort of a love-letter to Japanese-style RPGs (especially games such as Final Fantasy VII), it tells a Science Fiction story that follows the tale of a down-on-his-luck detective Sylvester "Sly Boots" Bucelli and his eclectic True Companions, who range from a stripper/assassin to an old collector of seemingly inert Phlebotinum to an alcoholic superhero to a planet shrunken down to your size. In true JRPG tradition, Sly and his companions travel to a variety of planets, meet interesting and weird people, hunt for widgets, and engage in a lot of Turn-Based Combat.
Advertisement:

Although intended to be a humorous game, it isn't really a parody of the genre. It features a wide variety of tropes commonly associated with Japanese RPGs of the period such as the 3D installments of the Final Fantasy series, as opposed to Western PC RPGs of the period such as the Baldur's Gate series. The game did reasonably well with critics, but was not a big seller. Among those who did play it, it is notorious for its ending, which is a very obvious lead-up to the sequel that was never to be.

The game was compiled into a feature-length Machinima in 2003 by one of its creators; it can be watched here.

The game is available for sale through GOG.com and Steam.