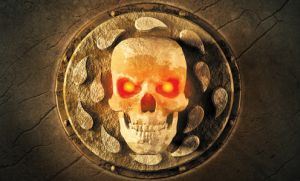 Baldur's Gate is a Role-Playing Game series set in the High Fantasy setting Forgotten Realms, using an adaptation of the Advanced Dungeons & Dragons 2nd edition ruleset. The focus is on quests, characterization and dialogue, combined with a solid combat system and a continuous plotline. The original games were developed by BioWare and published by Black Isle Studios. More recently, other developers have taken up work on the series — updated editions and a new expansion were produced by Beamdog, which was founded by BioWare alumni, and in 2019, it was announced that a full new game would be created by Larian Studios.

The plot of the main games center around a hero (you) who is regularly pursued due to power granted by a Mysterious Parent: Some want those abilities for themselves, others are simply fearful of what the hero may become because they know that With Great Power Comes Great Insanity. The first game centers around the hero learning about the powers and their source; the second deals with the consequences and choices that come with that power and knowledge.

The series is best known for its memorable selection of sidekicks, which your hero can have up to five of at any time. All have distinct, if sometimes simple, personalities and backstories, and most will drag you into at least one side quest unique to them if they stay on your team long enough. Especially in the sequel, they become fully fleshed-out characters and have a tendency to make comments or suggestions about the current situation, and interact with each other extensively.

Prior to creating Baldur's Gate, Bioware had only developed the Humongous Mecha Simulation Game, Shattered Steel, and ended up switching its company focus from action games entirely and solidified their position as perhaps the most popular modern developer of the Western RPG. Baldur's Gate was the first game to use the Infinity Engine, which was later used for the Icewind Dale series and Planescape: Torment. Since Interplay Entertainment's license from WotC for AD&D ran out except for the Baldur's Gate franchise, Interplay made two unrelated AD&D-based games with the "Baldur's Gate" moniker: The console exclusive Gauntlet-alike Baldur’s Gate: Dark Alliance series, and The Black Hound (codenamed "Project Jefferson"), a canceled game that was actually going to be sold as Baldur's Gate III. Allegedly, the game was about 80% done according to a developer on the project before being canceled. Josh Sawyer planned adapting the plot as a module for Neverwinter Nights 2, but the project was ultimately canned due to lack of time.

A novelization was written by Phillip Athans, but the fans don't like to talk about it. A comic spin-off called "Legends of Baldur's Gate" was announced in July 2014

The fandom has an active modding community, and many elaborate fan-made characters and quests exist. BioWare writer David Gaider, who provided much of the game's dialogue, also created his own unofficial version of Throne of Bhaal with plenty of added difficulty for hardcore gamers. Additionally, Gaider used to hang out at the modding community's forums, helped out with dialogue for fan-made characters, and wrote silly Fan Fiction.

An enhanced version was announced on March 15th 2012

and released for PC on November 28th, 2012, also available in Mac and tablet versions. The enhanced edition includes all essential bugfixes and tweaks, a gorgeously streamlined look, and three new characters with their own quests who will make casual conversation/argue/flirt with you. The Enhanced Edition of Baldur's Gate II was announced on August 30th 2013 (delayed by legal issues with Atari that had temporarily suspended sales and work on the games) for PC and Mac for November 15th 2013. It carried over the enhancements from the first game, and added another new character with her own quest (in addition to the three introduced in the first game). This version has also been ported to iOS and Android.

On June 6th, 2019, it was publicly revealed that Larian Studios, creators of the famous Divinity series, will be taking up the mantle and creating the official third installment in the series. The launch trailer suggests the setting of Baldur's Gate will transition to current 5th Edition. The game will revolve around a mind flayer invasion of the eponymous city, from within

The setting also crosses over with Icewind Dale, and Planescape: Torment is considered a sister game to the series.

There's a character sheet, which is where you should put tropes associated with individual characters.

The Baldur's Gate main series as a whole contains the following tropes: