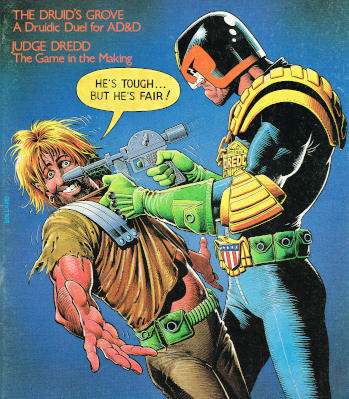 I AM the law!
"God knows, it's easy to be kind; the hard thing is to be just."
— Inspector Javert, Les Misérables
Advertisement:

One of the nine alignments from the best-known Character Alignment system. Lawful Neutral characters believe in order — personal, systemic, peace, three of them or either — above all else. They will always seek to obey and preserve order, even to the inconvenience of themselves and others, and even if they themselves admit the law in question is an annoying one. While a Lawful Good character may justify breaking his code of conduct by appealing to the greater good that transcends all things, a Lawful Neutral character will not, since the greater good does not enter into it.

An important thing to note is that Lawful Neutral characters follow their own personal vision of order and law. This order may be defined by the laws of their current location, or it might not: Lawful Neutral characters will not obey every law they ever encounter, only those that are part of or do not conflict with the code they themselves obey. They may perfectly rebel against authority if they disagree with this authority's laws, and still be Lawful.

Lawful Neutral comes in a number of different forms:

Any of these types can fall into Lawful Stupid if they are not careful, and not thinking critically enough. However, none of them automatically equate to it, and each has as good a chance of being a Reasonable Authority Figure or equivalent as the next.

A Lawful Neutral alignment is easy to play because it involves adherence to defined codes first and foremost — all personal moral issues come second. On the other hand, it can become rather restrictive and predictable. Those adhering to personal codes rather than the law may find it tough to uphold, as the only one to make sure they keep to their code is them. Furthermore, inexperienced roleplayers who play as Lawful Neutral 'cop' types may find themselves slipping into Lawful Stupid territory.

The key here is the desire to preserve or create order, at any personal cost. The character will be unquestioningly devoted to the written code, either because they don't have the intelligence to apply critical thinking to it, or because while they are intelligent and capable of independent thought when needs be, preservation of the society is the ultimate goal, and it is believed that the Law and the society itself are inescapably the same thing. If the Law is compromised, the society will go with it. Altruism and egoism are generally regarded as irrelevant, with each being considered as potentially dangerous as the other.

In theory, many loyal servants of the Empire, and Lawful Evil Big Bads in general, should tend towards this alignment because they believe in authority and law over considerations of good or evil. However, in practice, this is the type of Lawful Neutral character that is by far the most likely to end up doing evil deeds by following orders, slipping into the Lawful Evil alignment.

If you have difficulty deciding which alignment your neutral-aligned character belongs to, the main difference between Lawful Neutral, True Neutral, and Chaotic Neutral is not their lack of devotion to either good or evil, but the methods they believe are best to show it:

Others, such as characters with Super OCD and Creature of Habit, can vary between Lawful Good, Lawful Neutral, and Lawful Evil.