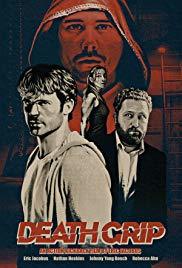 Death Grip is a 2012 film by Eric Jacobus starring members of The Stunt People and Johnny Yong Bosch. Kenny (Jacobus) is a former drug dealer, now working as a caterer. At the start of the film, he is checking his brother Mark out of a group home, after fifteen years of separation, possibly linked to the death of their mother in a house fire, for which both sibling blames themselves. When called in for emergency catering at a museum event, Kenny is forced to bring Mark along. The two brothers are present at the museum when a satanic cult, the Knights of Judas, arrives to steal one of the exhibits, one of the thirty pieces of silver given to Judas in the Gospel. When the cult kidnaps Mark, Kenny is forced to descend into the depths of their compound to rescue his brother.