Comic Book / Requiem Of The Crazies 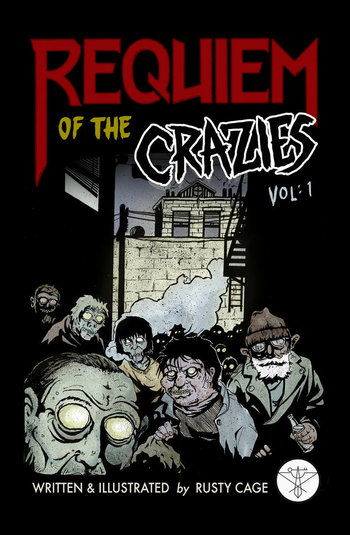 I’m not a fool, I been to school, I’ve read Sun Tzu, You see us bums are people too.
Advertisement:

Created by musician and self-described Z-list YouTuber Benjamin “Rusty Cage” Steele, Requiem of the Crazies is a planned 8-issue indie comic series based off his own song of the same name.

After having lost his dreams of becoming a rock star, the protagonist Dante has settled for a lowly dead-end office job and a crappy apartment with his girlfriend. One day in his pathetic life, Dante has it worse when he’s fired from his job and comes home to find his girlfriend sleeping with another man. Just before he can end it all in a dirty street alley, an old bum named Vernon convinces him to join him in the world of homelessness.

And so begins a dark, gritty tale of corruption, a diabolical cult leader, and cannibalism as the two make their journey through the dark underbelly of a nightmarish city.

Tropes present in Requiem of the Crazies