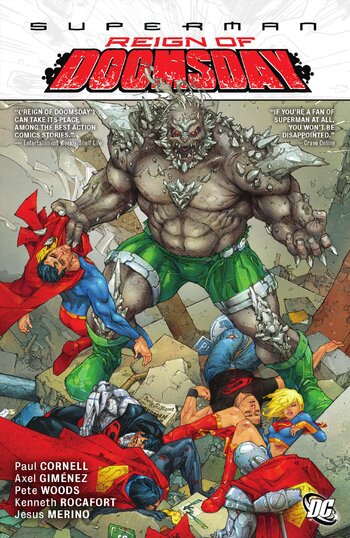 Reign of Doomsday (also known as Reign of Doomsdays) was the last Superman Family team-up prior to the 2011 DC reboot which worked as the Grand Finale for the Post-Crisis Superman and his world.

As Superman is going on a walkabout through America and Lex Luthor is pursuing godhood, Supergirl, Superboy, Steel, the Eradicator and Cyborg Superman are attacked by Doomsday clones who are not only highly adaptative but also seem to copy their skills.

One by one, the Supers are defeated and taken to a pocket dimension located inside a spaceship where the Doomsday clones begin a deadly "hunter-and-prey" game. The situation seems dire until Superman comes along and starts coordinating the team.

Unfortunately, one of the Doomsday clones has evolved, developed sentience and gained hatred towards all living beings. Calling himself Doomslayer, he intends to use their spaceship to simultaneously kill the Super-Family and turn Earth into space dust.

The story was told in the next issues: