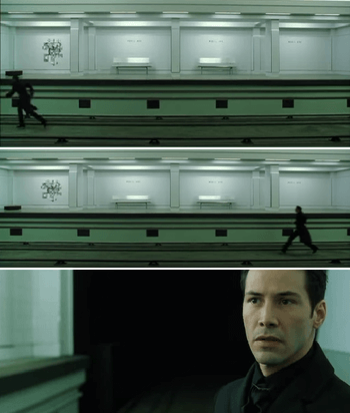 "...shit!"
None of it made any logical sense. And as Stanley pondered this he began to make other strange observations. For example, why couldn't he see his feet when he looked down? Why did doors close automatically behind him wherever he went? And for that matter, these rooms were starting to look pretty familiar; were they simply repeating?
— The Narrator, The Stanley Parable
Advertisement:

When trying to do anything, free mobility is a big help, but not something people often think about. Most of the time, we can physically get from point A to point B, even if the route is difficult or unusual, and it's said that this journey is better than the destination itself. We take it so for-granted that we can just walk down our hallway and end up where we need to go, that when this expectation is subverted, it can be quite the confusing or even disturbing event.

When there's an explanation, it's almost always supernatural in origin, and may even exist just to make the character experiencing it suffer. Like a Time Loop Trap, the person stuck will go insane, but rather than have the loop apply to their life, it applies to the very place they're in, with seemingly no way out unless the forces at work decide to give them one. It may also be an intentional trap set up by someone with Reality Warper abilities. At the same time, it may be a literally repeating set of scenery, or be caused by teleportation shenanigans.

In video games, this can manifest as a puzzle — the player will be stuck in a loop until they figure out how to escape it. In fact, a common setting in video games with fixed top-down views is to have a room with four entryways, where taking the south exit always leads back to the exit, and going through the north, east and western doors in the correct sequence is the key to going through the maze.

Compare with the more mundane Going in Circles. Related to, and often overlaps with, Bizarrchitecture, Alien Geometries and Mobile Maze, but doesn't always; this can also be a small-scale Eldritch Location. May take the form of an Endless Corridor or Absurdly Long Stairway; and likewise, any use of Scooby-Dooby Doors is an example of this. When done in a visual medium, Seamless Scenery is often used to pull off the effect. See also Wrap Around, for when the very edges of a screen are connected, and the Wraparound Background, for when animated backgrounds are repeated for the sake of a budget. Finally, contrast with Non Sequitur Environment, where the weird part is that the environment is changing.