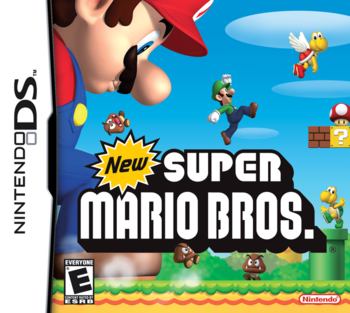 The plot is rather simple. Bowser Jr. kidnaps Princess Peach, and Mario gives chase through eight worlds, each with at least one fortress and one castle. Each fortress ends with a battle with Bowser Jr., who retreats to either another fortress or a castle when defeated; meanwhile, the castles end with a unique boss fight. Before Mario can rescue Peach, Bowser Jr. nabs her and runs off to the next world, which is gonna happen a few more times.

In addition to the series' usual power ups of the Super Mushroom, Fire Flower, and Starman, NSMB introduced some new ones. The Mega Mushroom turns Mario into a giant à la Super Mario 64 DS, allowing for some massive property damage. The Mini Mushroom shrinks Mario to the size of a mouse, enabling him to get through very small passageways and run on water at the expense of death in one hit. The Blue Koopa Shell allows Mario to protect himself while crouching; when running, he can knock enemies away just like the Koopa shells he kicks. Finally, Shell Mario can swim better underwater.