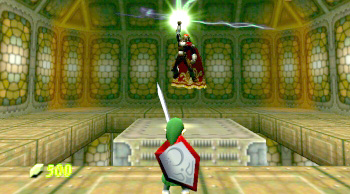 Looks like a good place to play tennis.
"Hmm, a large arena-type area... No enemies in sight... And no visible means of escape. This can mean only one thing...
That it's a perfect place to take a little rest!"
— Gordon Frohman, Concerned
Advertisement:

The room in a video game where the boss and the player exchange blows. Typically features an imposing entrance door, and decor fitting the boss villain's Motif. May or may not be preceded by a Boss Corridor.

The appearance of a boss room will typically have the following characteristics:

The boss may be waiting for you in plain sight, or you may have to search before realizing that He Was Right There All Along.

Exit is typically not allowed until the Boss Battle is over, after which one may leave the way one came, exit through an alternate door, or be teleported out, through either Phlebotinum or plot device.

Amadeus Wolfgeist, the first major boss of the game, has a massive open room where Luigi fights him, with big doors leading to it.

Amadeus Wolfgeist, the first major boss of the game, has a massive open room where Luigi fights him, with big doors leading to it.