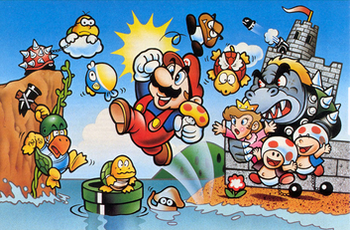 BUT OUR PRINCESS IS IN
ANOTHER CASTLE!
—Toad
Advertisement:

The first game in the Super Mario Bros. series, but the fourth game overall that stars Mario, and the game that singlehandedly kicked off The 8-bit Era of Console Video Games. After appearing in Donkey Kong, Mario Bros., and Wrecking Crew, the Mario Brothers moved on to the game that set loads of standards. Not just for platformers, but any genre that used conventions established in this game. Released for the Family Computer on September 13, 1985 in Japan, and for the Nintendo Entertainment System on October 18, 1985 in North America.note The NA release date has been subject to debate.

The general story is that Bowser, the ornery King of the Koopas, has conquered the Mushroom Kingdom and had all of the subjects turned into background textures—er, bricks and shrubbery. The Mushroom Kingdom's Princess is the only one who can revert his black magic, but he has kidnapped her in order to prevent this. Mario, ever the gallant one, storms several castles looking for her. Unfortunately for Mario (and you), Bowser has several body doubles, and there's no way to tell who's the real one, so it's a long road ahead.

This game was highly formative for the later series. Most notably, it introduced the basic storyline of Mario rescuing Princess Toadstool (later Peach) from Bowser that later games would copy, modify, subvert, deconstruct and reconstruct again and again. In addition, it introduced Toadstool and Bowser's characters, alongside the Toads, the Mushroom Kingdom, the basic system of powerups that would become central to later installments' gameplay, and a number of classic enemy types such as Goombas, Koopa Troopas and Paratroopas, Hammer Brothers, Spinies and Bloopers.

The original game was remade with SNES graphics along with the other NES titles in Super Mario All-Stars. There was also a Game Boy Color port called Super Mario Bros. Deluxenote which, as a result, prevented the All-Stars version from getting a GBA remake, though that somehow didn't stop Nintendo from directly porting the original NES version to the GBA instead. This included a Challenge Mode where you had to get a high score, collect five Red Coins, and find the Yoshi Egg in each stage; a two-player race mode; badges and other images awarded for achievements; a high-score table; extra utilities and printables; a hidden "You vs. Boo" mode (a one-player version of the two-player game); and a hidden conversion of Super Mario Bros.: The Lost Levels, but only Worlds 1-8. There was also an Arcade Game called VS. Super Mario Bros.

and a port for the Game Boy Advance was released as part of the Classic NES Series. For the 35th anniversary release, a Game & Watch version was released as well as an online battle royale version for Nintendo Switch called Super Mario Bros. 35. Lastly, in both Super Mario Maker and Super Mario Maker 2, there's a game style based on this one, allowing players to create their own SMB1 levels (including recreations of World 1-1, though one such version is already present in the games proper among the pre-installed levels). The VS. edition would later get a port on the Nintendo Switch as part of Hamster's Arcade Archives series.

Nobuo Uematsu has stated that the theme music, originally created by Koji Kondo, should be Japan's national anthem.

YOUR QUEST IS OVER.
WE PRESENT YOU A NEW QUEST.

PRESS BUTTON B
TO SELECT A WORLD
—Princess