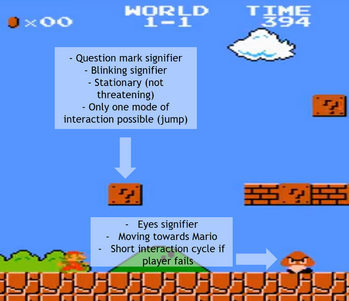 "Mega Man X on the other hand, has so much to offer, and it teaches you all of it in the first level, no, in the first fuckin' seconds of the game. It's nuts!"
— Egoraptor, Sequelitis
Advertisement:

This is a supertrope for any way that designers communicate things to players using level design. This is Show, Don't Tell style stuff, techniques you can use to inform players without having to bore them with text.

Often, instructive level design is about teaching the player controls, basic rules, or patterns in a game. E.g.: The first scene of Super Mario Bros. can teach you "Mario will be hurt by goombas, Mario can get things out of question blocks by hitting them from below, Mario can grow big by getting a mushroom, etc." Obviously you'll find that kind of instructive level design at the beginning of a game.

You can use instructive level design for things other than teaching basic rules, though. In Portal, for example, test chamber 10 (around half an hour into the game) teaches you the "fling" tactic. The "fling" is not a basic rule of the game, but is a useful tool that is constructed out of a combination of basic rules (the basic rules that get combined are "you fall with some acceleration" and "portals can change your direction").

Contrast this with Tutorial Level, where the designers sit you down and explicitly inform you about the game's mechanics rather than let you learn through experimentation.