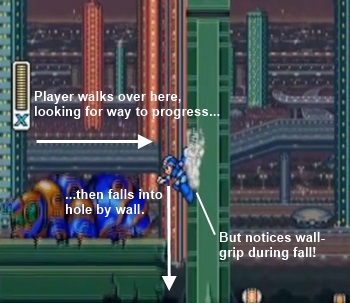 "We simulated what the player would do. If a suspicious enemy appears, the player will need to jump over it. And again if we have a question block, they might want to try and tap that as well. When they see a coin, it'll make them happy and they'll want to try again. Argh! You try to run away but you're hit. But by being hit you become bigger, and that makes you feel really happy."
—Shigeru Miyamoto on how he designed

This is when a game encourages the player to make a certain specific "mistake" that might illuminate something for them. Everyone loves surprises, and making a discovery accidentally is very surprising. So you'll remember what you've been taught much better than if, say, it had been told to you by a text box.

Compare with I Meant to Do That. Subtrope of Instructive Level Design.