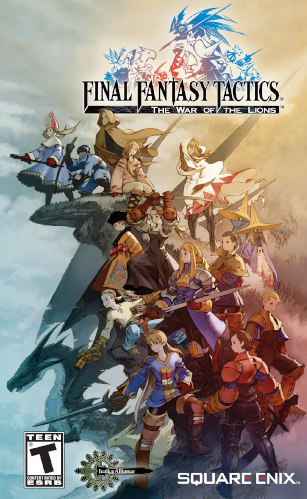 Final Fantasy Tactics is a Gaiden Game entry in the pants-twistingly popular Final Fantasy series. It combines Turn-Based Strategy with a Role-Playing Game, and is the first game in the series to take place in the world of Ivalice. Due to the immense resemblance and many developers shared between the two series, particularly Yasumi Matsuno, the game can be seen as a Spiritual Successor to Tactics Ogre.

Set in the fantasy world of Ivalice, the game's Framing Device is a report from a present-day historian who has uncovered a secret set of documents called the "Durai Report". These records purportedly reveal the truth behind the "War Of The Lions": a Succession Crisis from centuries ago when two competing lords waged a war of intrigue and blood to place their desired puppet ruler (Princess Ovelia, or her younger brother Orinas) upon the throne. The story is widely known and retold as the Rags to Riches tale of commoner and folk-hero Delita Hieral, who put an end to the conflict and corruption and became the king of Ivalice himself.

But according to the Durai Report, the true hero in this tale is Ramza Beoulve: the second-youngest member of the noble Beoulve family, Delita's childhood friend, and a traitor and heretic whose name has been stricken from all historical record. As Ramza grew up from a naïve military cadet to a hardened mercenary, he became deeply embedded in not only the shadow war for the throne and the risk of all-out rebellion by the commoner classes against the tyrannical nobles, but an Ancient Conspiracy by the Glabados Church to Take Over the World. Contrasting the actions of Ramza are those of Delita, who sought to manipulate the various sides of the war to achieve his own ends.

While not the traditional Final Fantasy fare, it was embraced by Turn-Based Strategy fans for its challenging, satisfactory gameplay and the sheer depth of its Job System — which took the similar mechanics from Final Fantasy III and Final Fantasy V, cranked it Up to Eleven, resulting in a level of army customization reminiscent of tabletop wargames. It was also infamous for its "Blind Idiot" Translation and resulting Engrish, often called "Daravonese" after the tutorial character who spouted most of it. The PSP remake was re-localized by long-time Square Enix collaborator Joseph Reeder, and featured many bugfixes as well as motion video cutscenes and additional dialogue.

It has been re-released three times. The first was on the PlayStation's "Greatest Hits" line, though it still remains hard to find for that console. The next was for the Playstation Portable: the Video Game Remake Final Fantasy Tactics: War of the Lions, which added FMV cutscenes, a few new secret characters, and (in the new translation) more elevated language to capitalize on the game's tonal resemblance to the book series by George R.R. Martin A Song of Ice and Fire (the two share not only an emphasis on politics and motivation, but an inspiration in the real-life Wars of the Roses). Finally, WotL was re-released for iOS and Android.

I got a good feeling!