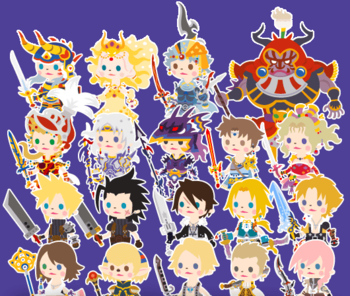 Final Fantasy Brigade is a cellphone game in the skin-scorchingly popular Final Fantasy juggernaut. It was released in January of 2012 for Mobage phones and had a North American release under the name Final Fantasy Airborne Brigade.

The world used to be protected by two crystals. However, an invasion by monsters shattered one, and the other has somehow lost its light. The player must seek out the ancient espers and show them their power in order to return light to the crystal and save the world.

The gameplay is similar to early titles in the series, but it has the added twist of being a social game. The titular "brigade" refers to a brigade of airships, one airship belonging to each player and a brigade made up of a group of friends. Taking quests and earning experience allows you to level up your brigade.

As of July 25, no more events are scheduled. The game ended it's North American service on December 1st 2014.