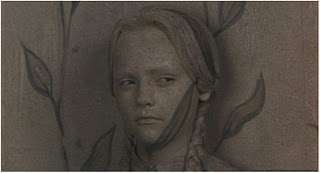 The Walls Have Eyes.
Advertisement:

This is when a character is decked out in an outfit that blends in seamlessly with the wallpaper or furniture upholstery, to the point they're either invisible or seem like a (not giant holographic) floating head and hands. Why are they wearing such a bizarre get up? They may have gotten the shirt/dress as a horribly tacky gift, worn a normal article of clothing and through sheer random chance end up in a place that they blend in to. Or they may be Crazy-Prepared and created the outfit/camo paint combo from scratch precisely to blend in to the background. Hollywood Chameleons can do this naturally.

Related to Stand-In Portrait, if they are impersonating a figure in a mural it is that trope not this one. See also Chameleon Camouflage and Nobody Here but Us Statues.