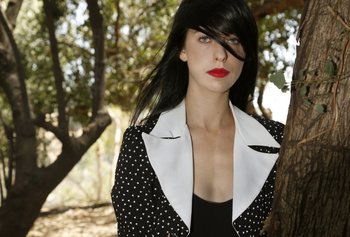 Kimbra (born Kimbra Lee Johnson on March 27th, 1990) is a singer from New Zealand, although she has moved to Australia and then to the The United States. Her main genre was initially soul, though she has since branched out into R&B, funk, and electronic music. Her breakthrough came when she was featured in Gotye's "Somebody That I Used to Know" in 2012; aside from that, she's released three albums: Vows (2010/2012), which got two separate releases internationally and in the United States, and The Golden Echo (2014), which was released internationally, as well as Primal Heart (2018).

Tropes in her songs include: