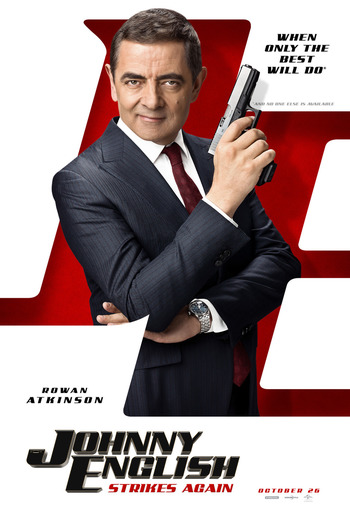 Johnny English Strikes Again is a British spy comedy film parodying the James Bond secret agent genre. The film is the sequel to Johnny English Reborn, and was directed by David Kerr. It was released on 20th September, 2018.

When a cyber-attack reveals the identity of all active undercover agents in Britain, Johnny English becomes the secret service’s last hope. Called out of retirement, English dives head first into action with the mission to find the mastermind hacker. As a man with few skills and analogue methods, Johnny English must overcome the challenges of modern technology to make this mission a success.

Rowan Atkinson reprises his role as the title character, along with Ben Miller as his former assistant Bough, Olga Kurylenko as Russian spy Ophelia Bhuletova, Jake Lacy as billionaire Jason Volta, and Emma Thompson as the Prime Minister.

"For god's sake, tell me the agent you got on the field is making some progress."