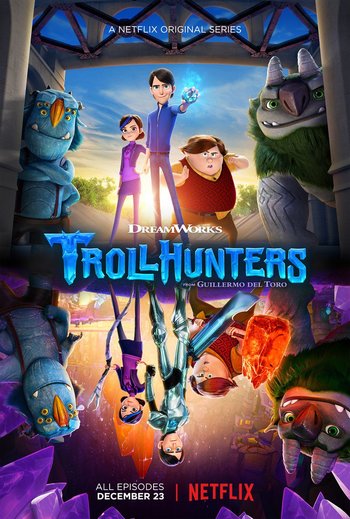 For the glory of Merlin, Daylight is Theirs to command!
"Destiny is a gift. Some go their entire lives living existences of quiet desperation. Never learning the truth, that what feels as though a burden pushing down upon our shoulders is actually the sense of purpose that lifts us to greater heights. Never forget that fear is but the precursor to valor and to strive and triumph in the face of fear is what it means to be a hero. Don't think, Master Jim. Become."
— Blinkous "Blinky" Galadrigal
Advertisement:

Trollhunters is an American computer-animated television series created for Netflix by Guillermo del Toro, produced by DreamWorks Animation and Cha Cha Cha Films. The first two episodes of the series premiered on October 8, 2016, at the New York Comic Con. It was released worldwide on Netflix on December 23, 2016.

In a world that is seemingly mundane and normal, there exists something deeper beneath the surface, and in some respects, even right beneath our very noses...

Arcadia is a peaceful Californian city, where the day to day life is what most would expect it to be: work for the adults, school for the kids, and all of the trappings thereof. James "Jim" Lake Jr. is a 15 year-old young man who lives his days as such, looking out for his hardworking doctor of a mom, and his best friend/neighbor who lives across the street, Tobias "Toby/Tobes" Domzalski. High school life is the most exciting thing he's ever known, and its daily affairs and his pining for one Claire Nuñez aside, he not-so-secretly yearns for more. More to life, more adventure, more excitement. Just something more.

Little does he know that he's about to get that wish granted and then some, when he and his friend take a short cut to school and unknowingly happen upon the remains of a petrified and shattered Troll by a quarry bridge. Drawn to a peculiar amulet by a mysterious voice, young Jim takes his first step into obtaining that "something more" that he seeks, as well as the first step to saving the fate of two worlds from utter darkness, destruction, and devastation...

Along with the announcement of the second season, an entire trilogy of shows dubbed Tales of Arcadia was announced, with Trollhunters to be followed up with 3Below and Wizards.

A feature film titled Trollhunters: Rise of the Titans, which serves as the Grand Finale of the franchise, was released on July 21st, 2021.

Despite the timing, it has nothing to do with the 2016 DreamWorks film Trolls.

open/close all folders
#-F
G-L
M-S
T-Z
"For the glory of The Internet, TV Tropes is mine to command!"
Feedback