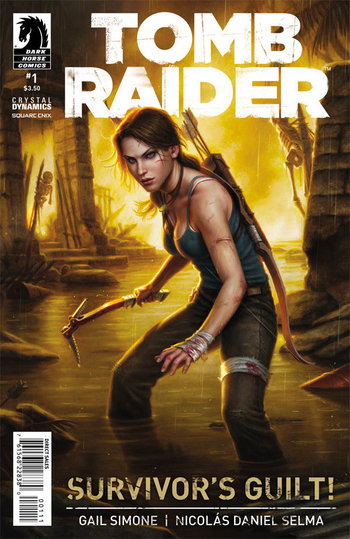 Your treasures are hers.
Advertisement:

The Tomb Raider comic series are a spin off of the Tomb Raider franchise. They follow the adventures of Adventurer Archaeologist Lara Croft as she travels the globes, visit exotic locations, and shoots people.

The first series was published by Top Cow Productions and follows the adventures of Lara Croft during her original continuity. Having lost her father, mother, and fiance in a plane crash—she has since become an Thrill Seeker who struggles to fill her life with adventure. Teamed up with Lovable Rogue love interest Chase Carver, she finds numerous supernatural artifacts located across the Top Cow Shared Universe.

The second series was published by Dark Horse Comics starting in 2014, and takes place in the Tomb Raider reboot continuity after Tomb Raider (2013) and its sequel after Rise of the Tomb Raider. It was written by Gail Simone and Rhianna Pratchett.note Simone for the first six issues, Simone and Pratchett for the next six, and Pratchett for the remaining six. The series follows Lara dealing with the aftermath of her adventures in Yamatai and her struggles with the Trinity organization. There was also a prelude, Tomb Raider: The Beginning, written by Pratchett.

Another Dark Horse series continuing after Rise of the Tomb Raider ran from 2016–2018. The first twelve issues were written by Mariko Tamaki. The following arcs, Survivor's Crusade and Inferno, were written by Jackson Lanzing and Collin Kelly.