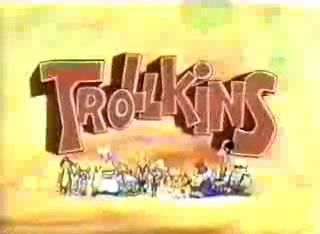 A Hanna-Barbera production, Trollkins was a 1981 animated series premiering on September 12, 1981. Taking inspiration from The Dukes of Hazzard and the Troll Dolls toyline, Trollkins ran for one season on CBS. It had only 13 half-hour episodes, but each was split into two segments, so technically there were 26 episodes.

The trolls are a race of different-colored beings living in a tree community called "Trolltown." The show’s plot follows the adventures and misadventures of Blitz, Pixlee and their pet dog, Flooky. Other residents include Blitz's father, the somewhat short, incompetent, hot-headed, fumble-mouth Mayor Lumpkin; Pixlee’s father, Sheriff Trollsom, who’s more mild-mannered, and the sheriff's two deputies that are just as incompetent and fumble minded in maintaining order. There’s also a renegade motorcycle nuisance gang known as the Troll Choppers, who terrorized the Trolltown denizens from time to time. Nonetheless, despite the escapades of each plot, there was no complete love lost amongst the trolls.