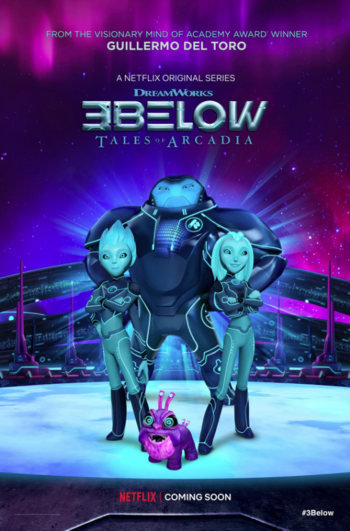 They come in peace, Bounty Hunters leave in pieces.
Advertisement:

3Below is an American computer-animated television series created for Netflix by Guillermo del Toro, produced by DreamWorks Animation and Cha Cha Cha Films.

Two royal aliens, Aja and Krel Tarron of House Tarron, along with their bodyguard, Commander Varvotos Vex, and their pet dog named Luug, are forced to flee after the ruthless General Val Morando leads a rebellion on their home planet of Akiridion-5. With nowhere else to go the trio end up crash-landing on Earth, in the city of Arcadia Oaks. There, the Akiridons adjust to human culture while trying to fix their spaceship to return home, and stop Morando.

The show is the second series in the Tales of Arcadia animated franchise, a sequel show to the series Trollhunters. 3 Below was released on December 21, 2018 and was followed by Wizards (2020), which serves as the Grand Finale of the trilogy.

Barbara, Walt and NotEnrique make a mild cameo in the 3Below episode "Mother's Day", having been taking care of the cradlestone babies from the Trollhunters finale.

Barbara, Walt and NotEnrique make a mild cameo in the 3Below episode "Mother's Day", having been taking care of the cradlestone babies from the Trollhunters finale.