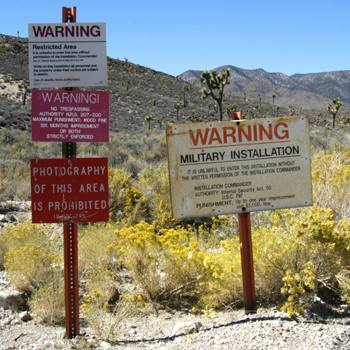 Clearly someone wasn't paying attention to the rule about no photography...
Michael: Where am I?
Vaughn: Well, some folks call it a private holding facility, others, a secret prison. I think it's officially listed as a document-processing center. So you can take your pick.
— Burn Notice
Advertisement:

A top secret facility belonging to The Government, Government Conspiracies, groups associated with the government, or NGO Superpowers. What goes on in this facility is highly classified, and if its existence is known to the public, those activities will often be the subject of much rumor, speculation, and Conspiracy Theories.

While this trope frequently overlaps with Elaborate Underground Base, a Black Site might be concealed merely by being remote. This was particularly common for Cold War-era media, as both the US and the USSR have/had perfect locations for isolated facilities. In American settings, sparsely-populated deserts such as those in Nevada and neighboring states are a popular choice. Meanwhile, Russian settings give you all the vast wastes of Siberia to play with. The occasional East Asian story could take advantage too, using the Gobi Desert, Tibet, or Inner Mongolia. In Israel, you have the Negev to set up your top-secret government research projects in. Alternately, if your setting doesn’t allow such extreme isolation, the facility can just be behind so much security that even if the public knew it was there, they'd never be able to get close enough to see it. Often times the site will not appear on any maps, and be airbrushed out of satellite and aerial photography, although they'll just as often be in the center of a strictly enforced no-fly zone, preventing aerial photographs from ever coming into being in the first place.

Note that in Real Life, the existence and locations of Black Sites will often not be officially classified as secret, but all information about them beyond that will be. This is why everyone and their dog knows about Area 51, but any further details about the facility — what it's for, what's inside it, what goes on there, who works there, and what it looks like from any vantage other than low earth orbit — were among the world's most infamous Unsolved Mysteries for decades before finally being declassified. However, even if the facility's existence isn't classified, that just means they legally can tell the public about it, not that they necessarily will.

There are four major types of Black Sites:

In any case, most variations also function as a secret army base or a headquarters for some secret organization.

In certain settings, organizations may decide to Landmark the Black Site or hide it behind a Mundane Front.

Compare Supervillain Lair, which tends to fall closer to the other end of the Sliding Scale of Realistic vs. Fantastic.