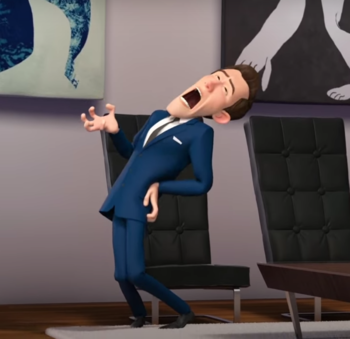 "Honey! Get my chiropractor on the phone!"
Q: [calmly] I think I just hurt my back... I'm feeling pain... I don't like it... what's the right thing to say? Ow?
Geordi and Data: [both nod and speak in unison] Ow.
Q: OWWW! I can't straighten up!
— Star Trek: The Next Generation
Advertisement:

Aging is one of those things that happens to us all (at least in universes where the aging process hasn't been defeated in some way).

As people (and other creatures) get older, their joints begin to crack and pop, despite their best efforts. Sometimes this is painful; sometimes it also prevents the crack-ee from being able to move. Arthritis and Rheumatism set in. You get the picture. It can even start as early as middle age when a person still looks young and hale, but finds they're not as young as they used to be when they try to act as young as they feel. It's often an old person just trying to stand up or do something ordinary, emphasizing the creaky, fragile state of an elderly body.

Oddly enough, in fictional media, this situation is frequently Played for Laughs, making this a very specific type of amusing injury.

The most commonly shouted phrase after the crack is "Oh, my back!" but the trope itself isn't confined solely to spinal-lumbar complaints and can happen with any body part, bone or joint. Occasionally, this will even happen with younger characters if they move in very awkward positions.

May be a sign that said character is Feeling Their Age and/or Dented Iron. Compare and contrast with Knuckle Cracking, in which a character cracks their knuckles audibly to intimidate or scare.

Due to his advanced age, Master Fu's attempt to transform causes his back to flare up. At this point he decides that he can't rescue Nooroo alone.

Alternative Title(s): Crack Ow My Back

Due to his advanced age, Master Fu's attempt to transform causes his back to flare up. At this point he decides that he can't rescue Nooroo alone.