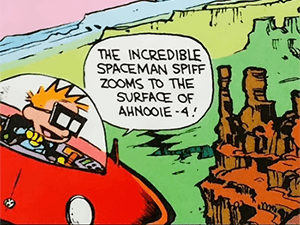 In speculative fiction, inhabited planets will often lack a proper name, instead being designated by the name of the star they orbit and a number. It is almost never the case that the star is referred to by a catalogue number. Natural satellites will also often lack proper names and be identified as "the moon of planet X" or somesuch.

In Real Life, notable celestial objects, like the other planets of the solar system, their moons and certain stars easily visible from Earth have had proper names for about as long they have been known to exist (although admittedly some are much better known than others). A large number of lesser objects, such as asteroids and extrasolar planets are assigned catalogue numbers. When extrasolar planets were first discovered in 1995, the astronomical community used lowercase letters instead of numbers (e.g. 51 Pegasi b, 70 Virginis b). While it is reasonable that an interstellar civilisation surveying a star system would initially assign numbers to the planets along the lines of "XLL325-1" for the first planet of the star XLL325, it would be strange if they failed to come up with proper names for the star and planets (eg. "Baltimore" instead of "XLL325") if they decide to colonise the star system. Even sillier is when a planet inhabited by an alien species is given such a label and said inhabitants begin to use that designation themselves. It's sillier still if the species has always called their own planet by a catalogue number. After all, how many humans in reality or fiction ever refer to our little world as Sol III?

This trope is arguably justified when the catalogue number is used by The Empire to name planets occupied by another species. Starfish Aliens may call their planet Krzjdlwsk, but stormtroopers trying to pronounce the name may be tempted to just use the catalogue number or come up with a nickname for the planet, like "Krazy Dullwhisk." May sometimes be a case of Translation Convention.

The trope can also be justified as a naming convention by a bureaucratic or military authority that wishes to come up with a neutral name that does not offend political sensibilities. This sort of thing is common on Earth, as anyone who's visited (London)derry in Northern Ireland or the Persian (Arabian) Gulf can attest. If two competing groups settle a planet, and one calls it Cleveland while the other calls it Cayuga, it might just be best for a visiting starship captain to call it "Rigel VI".