Anime / Voices of a Distant Star 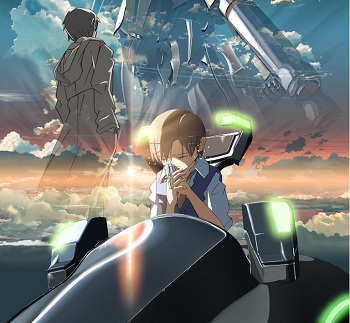 We are far, far, very, very far apart; but it might be that thoughts can overcome time and distance.
Advertisement:

Voices of a Distant Star (Hoshi no Koe) is Makoto Shinkai's first major work. This 2003 short film is considered one of the most poignant anime romances around, though it is particularly well-known for another reason: Shinkai scripted, drew, animated, and produced the entire movie on his own. In its original release, Shinkai himself voiced Noboru, as well.

Middle-school student Mikako Nagamine and her friend Noboru Terao had looked forward to attending high school together, but when humanity declared war on an alien force known as the Tarsians in 2046, she was drafted by the UN Space Army to serve as a Tracer pilot in a task force assigned to the spaceship Lysithea. Mikako leaves Noboru behind on Earth as the UN Forces pursue the Tarsians deeper into space. During their separation, she communicates with Noboru via email — but as the fleet travels farther from the Earth, the transmission time grows increasingly longer, until eventually Noboru must wait years for any word that Mikako is even still alive.

In addition to the OVA, a drama CD was released a few months later. A light novel by Waku Ooba was published the same year. A manga adaptation began serialization in 2004 and was published in compiled form in 2005. Finally, a second novel, Words of Love/Across the Stars, this time by Arata Kanoh, was published in 2006 but only received an English translation in 2019.

Voices Of A Distant Star provides examples of: