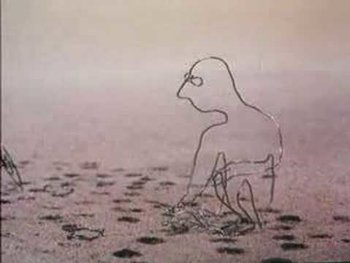 Vykrutasy ("Frills", sometimes also referred to as "The Coiling Prankster") is a 1988 animated short film (9 minutes) from the Soviet Union, directed by Garri Bardin, produced by Soyuzmultfilm.

It is a stop-motion animated short using nothing but a coil of steel wire. A coil of steel wire suddenly comes to life, with the end uncoiling itself, detaching from the rest of the coil, and bending itself into the shape of a man. After taking stock of his surroundings the man decides to improve them. He takes more lengths of wire and bends them into fruit trees and crops of vegetables, and he takes more wire and makes himself a house. He also bends wire into the shape of a dog, and finally he crafts himself a woman.

But there's a problem. Unseen visitors keep barging into his garden; one time he sees what look like the prints of an animal and another time he sees tire prints. The man protects his home and garden by crafting a wire fence, but the fence can't keep all intruders out—and he only has a finite amount of wire.