Anime / She and Her Cat 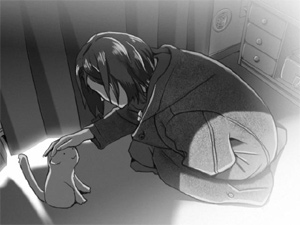 This world... I think we both like it.
Advertisement:

She and Her Cat: Their Standing Points is Makoto Shinkai's first independent work, a five minute short that was released in 1999. The focus of the story is the relationship between a woman and her cat; the latter provides the narration, recounting events in the girl's life about heartbreak and loneliness.

It is animated entirely in black and white, reflecting on the minimalist nature of the cat's perspective. Through the use of detailed still images and careful incorporation of sound, the end result is a highly concise and sweet tale of love and innocence, elements that Shinkai will integrate into all of his subsequent works.

A four-episode OVA, titled She And Her Cat: Everything Flows (Kanojo to Kanojo no Neko ~Everything Flows~) was released during the Winter 2016 Anime; with Makoto Shinkai's approval, the OVA was produced by Liden Films. The anime received a manga adaptation, simply titled She and Her Cat.

She And Her Cat provides examples of: