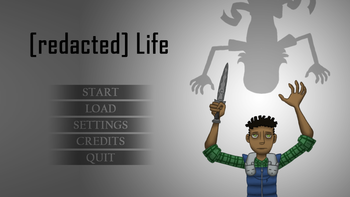 [redacted] Life is a comedy Horror Visual Novel that is "not what is seems." It's written by Katy133 and features unusual game mechanics that play around with the medium.

Adrian has just moved into an old mansion with his girlfriend, Rebecca. After another couple hurriedly leave the mansion, a spooky backstory about the house is revealed, and some seemingly unexplainable events occur, Adrian comes to a conclusion...

And he wants to leave...

The game is available for free on itch.io here.

Compare with Katy133's earlier work, Three Guys That Paint. Also compare and contrast other games that play with the medium: Save the Date, Undertale, Pony Island, Doki Doki Literature Club!, and Dreaming Mary.

Due to the nature of this work, spoilers will abound in the tropes. It's highly recommended that you finish the game before reading on. You Have Been Warned!