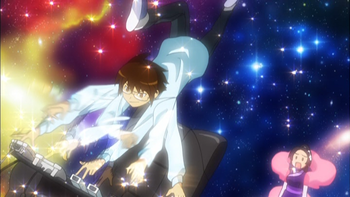 When Keima enters "God of Conquest" mode, he's capable of playing twenty-four games simultaneously.
"A group of unknown players who win every single game they play, with scores no one has ever come close to. Their account names are always left empty, so they're only known as "Blank." These gamers are said to be unbeatable."
— No Game No Life
Advertisement:

Many games will have That One Player who dedicates hours of practice to know the ins and outs, be at the top of the rankings, soloed the Superboss, acquired the Infinity +1 Sword, and found the Easter Egg no one even knew existed. Then there's this guy (or girl), who is the top of every game they try because of natural talent. The Godlike Gamer is essentially The Ace when it comes to video games. While That One Player tends to stick to one game and takes the fun out of it for other gamers due to their superior skill, the Godlike Gamer is a Master of All for games in general.

As amazing as they are online, in real life, expect them to be a loser Geek with No Social Skills and in the worst cases a NEET who dedicates their whole life to gaming.

This is a common choice for The Protagonist of an "Isekai" series, where a Genre Savvy gamer gets transported to a RPG Mechanics 'Verse. After all, who could have a better chance of surviving a game world than an expert gamer? While there, they are likely of becoming the World's Best Warrior.

If they are a villain, they're almost definitely a Internet Jerk and Smug Super who is a general jerkass to fellow players who loves to Kill Steal or player kill. Sometimes a cheating Game Master or a player using hax might pretend to be one before being revealed as a fraud.

May also end up as a King of Games if they try their hand outside digital games.