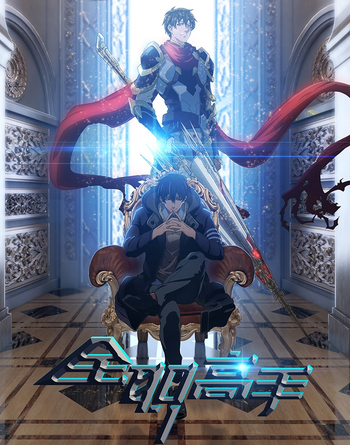 Set in mainland China, "Glory" is a Massively Multiplayer Online Role-Playing Game with over 130 million players worldwide, even earning status as a professional sport. Protagonist Ye Xiu is a 10-year Glory veteran and professional player for the "Excellent Era" team, captaining its players to three consecutive championships, earning him fame as the "Battle God" of the game. Unfortunately, The King's Avatar begins with his forced, unceremonious retirement from Excellent Era, getting kicked out of the team and thrown into the cold (literally), even forced to give up his Glory character "One Autumn Leaf". By chance, Ye Xiu wanders into a nearby Internet cafe, where he applies for a job as a night-shift manager from its owner Chen Guo, a Glory player herself and an Excellent Era fangirl. Thankfully, the job offers free room and board, along with access to a computer, which Ye Xiu makes the most of; however, upon hearing news Glory is about to open its tenth server, he decides to re-play the game from the very bottom, using a new character called "Lord Grim", dedicating to a Character Class no one has played in Glory for years: an Unspecialized character. As Lord Grim's notoriety increases by pulling off feats such as achieving the first boss kills and the fastest times in completing dungeons and raids, new and veteran Glory players slowly deduce Lord Grim is used by a Living Legend, having returned to the fold.

Unlike other stories centered around an MMORPG, The King's Avatar has no Fantasy-, isekai- or Science Fiction-related elements: rather, it keeps itself firmly rooted in Real Life. Glory is simply a video game, yet the series examines the intricacies of the environment, politics and corporate dealings and sponsorships of the professional "eSports" scene, where its fans and players treat it like an equivalent to Association Football leagues. Furthermore, expect explicit use of strategies and terms most players are familiar with for the MMO genre, such as being able to calculate Cooldown times for character's abilities and skills, determining hand speed with the keyboard and mouse, and knowing an opponent's weaknesses and exploiting them correctly.

An English translation of the web novel can be found here

. Meanwhile, other Derivative Works for The King's Avatar include the following:

The King's Avatar provide examples of: