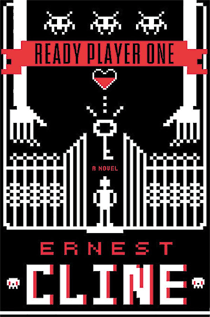 "The OASIS — it's the greatest videogame ever created, and it only costs a quarter."
Advertisement:

Ready Player One is a 2011 novel by Ernest Cline about a teen named Wade Watts, who spends all his time on OASIS, a virtual reality Massively Multiplayer Online Role-Playing Game that has replaced the Internet itself as humanity's primary means of recreation and communication. He plays to escape his boring, harrowing life in the trailer park he calls home. Wade's life is consumed by the quest to find the hidden fortune of the man who created OASIS, James Halliday. The only clues to how to get at it were hidden away in Halliday's personal writings, and the only way to decode them is... 1980s pop culture.

What follows is a story about life, adventure, and a love letter to the 1980s wrapped up in a science fiction plot that's told in a unique style.