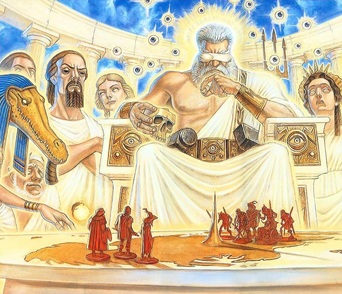 The gods don't toy with humanity; they play it.
"I knew it! I knew I was a piece in the middle of a cosmic chess game!"
— King, Housepets!
Advertisement:

An extension of Cosmic Plaything, where two or more gods (or similarly powered entities) are effectively using the entire world as a game board. Often one god is portrayed as actually caring about his pawns while his opponent is pure evil. May lead to a Rage Against the Heavens when the heroes find out they've been used. Often a god acts specifically through one mortal or a small group, sometimes an entire species. May be considered an inversion to Cosmic Horror Story, as the deities in question excessively obsess over the seemingly inconsequential mortals to the point of tormenting them with responsibilities and consequences beyond what they can rationally comprehend, though the tropes may overlap if the manipulators are incomprehensible entities or if the game has few high-order consequences.

This is a subtrope to Divine Conflict. Indeed, it might overlap with Combat by Champion to prevent the gods from duking it out themselves. Contrast Chess with Death. Human Chess is this on a much lower scale.