Film / The Gamers: Hands of Fate 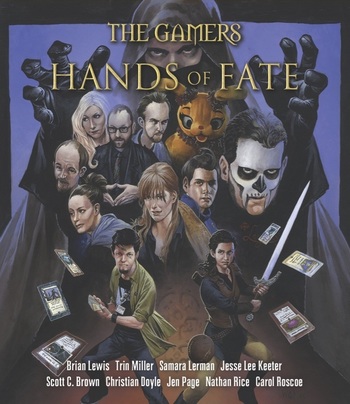 The third feature-length movie in The Gamers series, Hands of Fate brings back many of the characters from The Gamers: Dorkness Rising, though the focus of the film is on Collectible Card Games rather than Tabletop RPGs. We do briefly see the party from the second film and find out that Lodge is now running Pathfinder instead of Dungeons & Dragons (also seen in The Gamers Live).
Advertisement:

The plot focuses on Cass, who begins playing the story-based CCG Romance of The Nine Empires in an effort to impress Gamer Chick Natalie. At the same time, across time and space in the mystical land of Countermay, Princess Myriad is troubled by visions of her own death and the destruction of her kingdom - visions that seem more like long-forgotten memories than simple nightmares...

Unlike the previous installments of the series, this one was

Kickstarted and can be watched for free on YouTube

No relation to another film mentioning "The Hands of Fate".