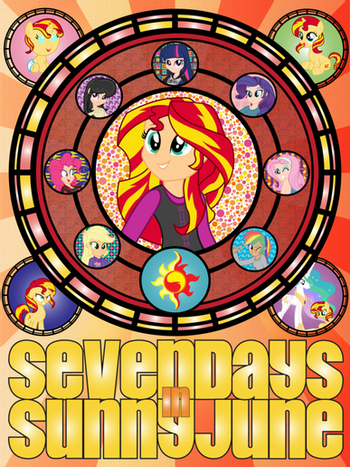 Just your normal reformed ex-unicorn and friends.
Seven Days in Sunny June, a joint project by Shinzakura, BlueBastard and Flynt Coal, is a My Little Pony: Friendship Is Magic fanfic, and the second phase of BlueBastard's Berylverse, set after the events of A Hairy Problem and A Hairier Problem: Rise of the Furball.
Advertisement:

Weeks after her defeat at the hands of the humanized Princess Twilight Sparkle, the one-time pony Sunset Shimmer is working towards making herself a better life. But in an unexpected chain of events, she ends up in a situation that not even her new friends - Applejack, Rarity, Rainbow, Fluttershy, and Pinkie - can get her out of... nor really do they want to. As if that's not enough, Principal Celestia's firmly against the whole deal.

But maybe if Sunset Shimmer sticks around, she'll get more than she bargained for — for good and ill...

Shinzakura has also approved a set of Recursive Fanfiction, written by Former Unicorn, Flash Frame and The Quiet Party:

The story continues in The Golden Age of Apocalypse.

The Berylverse as a whole has its own FIMFiction group

open/close all folders
Altogether
The Three Sunrises
Advertisement:
Book I
Please, Please, Please, Let Me Get What I Want
Treasure
Shake It Off
The Apple Tree
Protection
Broken Down in Sunny Town
How Great the Outcry
A Hairy Problem
Downtempo
You Are the Woman
Crazy Love
Book II
A Mother's Duty
Book III
Three Nights at Freddy's
Shards of Darkness
Innocence Lost
Book IV
Book V
The Knife's Edge