Fanfic / I Against I, Me Against You

This trope page is currently under construction. Anyone who has read this fanfic should feel free to add any tropes we seem to have missed. 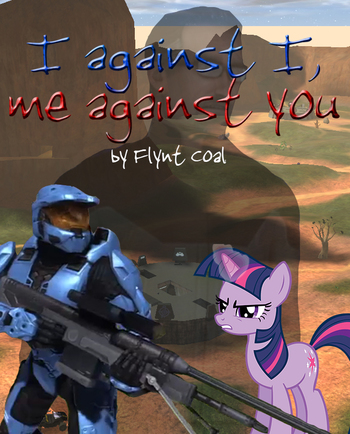 As these two demonstrate, friendship isn't always magic.
I Against I, Me Against You

is a Red vs. Blue/My Little Pony: Friendship Is Magic crossover by Flynt Coal. The story takes place after season 5 of Red vs. Blue and just after the season 3 premiere of My Little Pony.
Advertisement:

Everything changes for Twilight Sparkle and her friends when a mysterious extraterrestrial ship crash lands in Equestria. When Twilight messes around in the ship's systems with her magic, she ends up transported to an alien world unlike anything she imagined: a box canyon in the middle of nowhere.

To get home, Twilight must enlist the help of the eccentric Red and Blue soldiers that live there... if she can get them to stop bickering first! Additionally, she finds herself being pursued by the enigmatic military agency known only as Project Freelancer. Back in Equestria, all is not well for Twilight's friends as forces involved with the crashed ship make themselves known. Reds, Blues, and ponies will all have to work together to discover the mysterious connection between Equestria and Project Freelancer.

follows the story of a side character who appeared in only one scene of the main story after her husband Arcane Star was killed by the Meta.

In the end, a true friend is someone you never have to let go of. Someone who will always be with you in spirit. Even if they're not here right now....