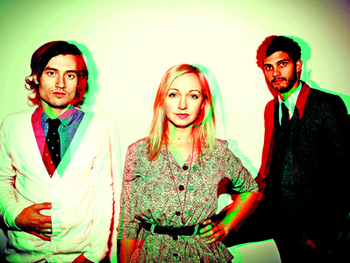 Hey Ocean! is a band from Vancouver, Canada. Together they've created a sound that's both unique and extremely catchy to become one of the more popular up & coming indie pop bands in Canada.

They released their first full length album Stop Looking Like Music in 2007 which was followed by Its Easier to Be Somebody Else in 2008, featuring several popular singles such as "Too Soon", "A Song About California", and "Fish". In 2011 they finally released a new EP Big Blue Wave, followed by the full length IS in 2012. The band has become well known in the Canadian music scene for their "do it yourself" work ethic.

Their lead female singer, Ashleigh Ball, also has a notable side job - she's a voice actress for The Ocean Group and has voiced the likes of Hansel, Oopsy Bear, Mary Test, Blythe Baxter, Jet Propulsion, and several Barbie and Bratz movies. Currently she's best known as the voices of Applejack & Rainbow Dash in My Little Pony: Friendship Is Magic. In fact, the band has gotten a boost in popularity thanks to curious pony fans checking out what else Ashleigh does. Fortunately she seems quite amused

by it, and there's nothing wrong with new fans.

, and their official YouTube channel (where you can watch all their music videos) can be found here

to fund a world tour due to after 7 years they've haven't had much luck booking shows outside of Canada. On September 26, 2012, it succeeded!