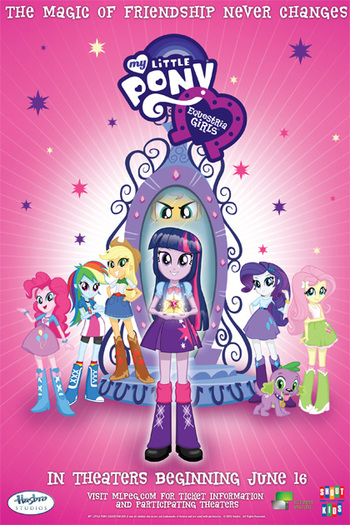 The concept is simple enough: take the characters of the hit TV show My Little Pony: Friendship Is Magic and put them in high school. Now the Mane Six must deal with things such as peer pressure, planning for school dances, popular girls with attitude problems, and yes... even boys. Oh, and did we mention the pastel-colored ponies are now pastel-colored humans? (And the baby dragon is now a puppy?)

Set between Seasons 3 and 4, the movie centers around the newly-crowned Princess Twilight Sparkle and Spike going into an Alternate Universe when her princess crown, revealed to be the Element of Magic, is stolen by Princess Celestia's former apprentice Sunset Shimmer, turning into a teenage human girl and a talking dog respectively in the process. Along the way Twilight meets human versions of her friends from Ponyville, all of whom turn out to despise each other, and a blue-haired fellow who seems like a nice enough guy. With the help of her new friends in this strange new world they must find the crown and change the destiny of the two parallel worlds.

The movie was written by Meghan McCarthy, premiered at the Los Angeles Film Festival on June 16, 2013, and had a limited theatrical run at over 200 US and Canadian theaters in June and July of the same year. It was released on DVD and Blu-ray in the US by Shout! Factory on August 6, 2013 and later released on DVD in other markets worldwide, and aired later still on The Hub on September 1st, 2013. See the first two trailers here

Shortly after the movie's premiere, IDW put out a prequel comic as the first issue of their My Little Pony Annual series, with the 8 page short about Sunset Shimmer's origins printed early in IDW's MLPFIM #9 variant at 2013 SDCC

The success of the first movie led to a number of sequels and specials. The movies include Rainbow Rocks (2014), Friendship Games (2015), and Legend of Everfree (2016). This was followed by a series of three specials collectively entitled My Little Pony: Equestria Girls – Magical Movie Night in 2017, as well as both Forgotten Friendship and Rollercoaster of Friendship in 2018.

Two different series of cartoon shorts featuring the characters were also created and hosted on Hasbro's YouTube channel. The first, Summertime Shorts, consists of 16 installments and was released in the Summer and Fall of 2017. The second is an ongoing weekly series of digital shorts that began November 17, 2017.

Not to be confused with the commercial of the same name

Example of:
Tears of Remorse