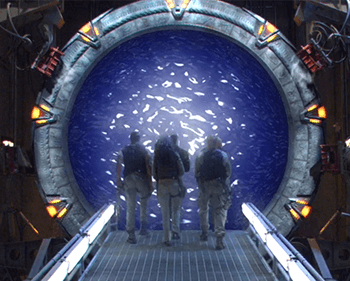 The coolest Cool Gate there is. It even spins, for added coolness... 'Cause it's cool!!
Stargate,
It’s a great big world,
With a great big swirl that you step inside to another world.

We’re talking Stargate,
It’s a crazy trip,
You can go quite far and you don’t need a car or even a ship.
— Joe Mallozzi, Paul Mullie, and Peter DeLuise singing the lyrics they invented for the Stargate SG-1 intro music
Advertisement:

First you're here. Walk through this here gate—possibly only when the moon is gibbous, or you have yellow violets in your left hand, possibly only with the Applied Phlebotinum and Techno Babble of quantum mechanics or folding space-time or maybe even magic—and then you are... there.

Unlike Cool Car, Cool Boat, etc., this is not about distinctly cool gates. Gates tend to be rare enough that they are all cool. Even when they interconnect into a Portal Network.

This is a common way of getting to Magical Land. After all, even the coolest of airplanes and boats have a little trouble with the travel there; subtropes include Portal Pool, Portal Door, and Portal Picture.

It's also common in Science Fiction.

Be warned that there is no guarantee of pleasantness or even familiar physics on the other side. Alien Geometries are not unknown.

After a time, Portal Slam may result, or it may close when in use.

Since there's no real-world analog to teleportation, writers can apply any variety of bizarre special effects to the act of being transported without hurting Willing Suspension of Disbelief. On the other hand, they can also appear relentlessly mundane—perhaps a simple arched doorway in a wall of crumbling stone—until you look or step through them, and notice the discrepancy.

Note that Thinking Up Portals is the trope for characters who can create holes in reality to transport themselves without crossing the intervening distances. This is a kind of Teleportation with Drawbacks due to placing restrictions on an entrance or exit. It may overlap Our Wormholes Are Different.

Has nothing to do with media or political scandals being referred to with a reference to "Watergate" or with a particular brand of toothpaste.