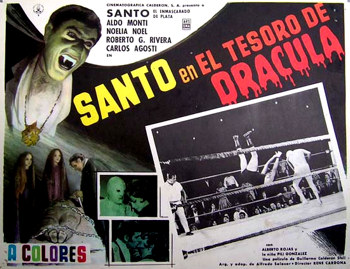 In this film, the heroic Masked Luchador El Santo has invented a working time machine. For some reason, Mexico's scientific community scoffs at the notion of a cardboard time machine invented by a professional wrestler, so Santo determines to prove them wrong.

With the help of Professor Sepulveda, his beautiful daughter Luisa, and cowardly comic-relief sidekick Perico, Santo gets his girlfriend to wear a sexy silver space suit, then sends her back in time to 19th century Mexico, where she inhabits the body of another young lady (though played by the same actress), the daughter of one Professor Soler.

Unfortunately, it turns out that Professor Soler's estate is being visited by the mysterious European Count Alucard, and a sort of transplanted, truncated version of Dracula (1931) ensues, with Luisa in the role of Mina. Professor Soler and Professor Van Roth defeat Dracula, putting a stake in his heart. Unfortunately, in a departure from the traditional story of Dracula, Luisa has already been turned into a full-fledged vampire herself by this point. To save her from a staking, Santo pulls her back to the 20th century, alive and well and not a vampire.

But the adventure isn't over, because in the modern era we have criminals searching for Dracula's lost treasure, wherein they get the brilliant idea of reviving Dracula himself, who quickly starts amassing a small army of beautiful Mexican vampire babes, and there's a wrestling match between Santo and the lead criminal's luchador son to win the last clue for the location of Dracula's treasure, and Dracula still has power over Luisa due to her time travel journey, and...

...and in other words, just another typical day in the life of El Santo.

This film is also notable for having an alternate "adult" version, El Vampiro y El Sexo ("The Vampire and the Sex"). Intended for release in more liberal overseas markets, it apparently had a limited release (newspaper ads exist for showings in New York-area Spanish language theaters), then was widely believed to be lost, with only production stills of nude lady vampires providing evidence of its existence.This version of the film was finally discovered by the producer's grand-niece and publicly screened in Guadalajara in July 2011.

On November 25, 2021, it was revealed that this movie would be one of the thirteen to be used as part of the thirteenth season of the cult-classic series Mystery Science Theater 3000.