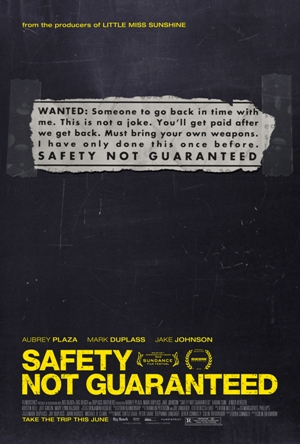 Sounds like a reasonable ad.
Wanted: Somebody to go back in time with me. This is not a joke. You'll get paid after we get back. Must bring your own weapons. I have only done this once before. Safety not guaranteed.
Advertisement:

A 2012 comedy film directed by Colin Trevorrow and produced by the Duplass Brothers. The above quote originally appeared as a classified advertisement in a 1997 magazine, and became an internet sensation

when YTMND was popular. However, the film borrows only the ad and goes in its own direction.

Darius (Aubrey Plaza) is a recent college graduate who can't find paid work due to her cynical Deadpan Snarker attitude, but works as an unpaid intern for Seattle magazine. An advertisement has recently been placed in the magazine by an anonymous stranger looking for a partner with whom to time travel. Staff writer Jeff (Jake Johnson) proposes finding this stranger in order to write an article about it, though in fact he only wants to go because the address on the ad is in the same town as an old high school girlfriend.

As a result, most of his work is done by Darius, who finds the guy who wrote the ad, Kenneth Calloway (Mark Duplass). She joins him as a partner in the supposed time-traveling adventure and concludes that he is not pulling a prank. So is he crazy, or can he really travel through time?

Primer this film is not, but it does lampshade a whole lot of Time Travel Tropes.