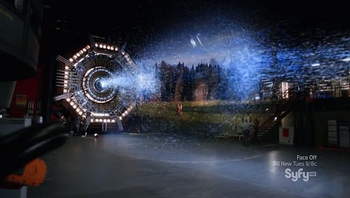 Totally not the large hadron collider, definitely a time travel machine...
"None of you have any idea what we're getting into. This window is not just some weapon of blunt force, alright? Everything in the past is connected, every moment, every- every event, it all adds up to this reality that we call the present. Can we use this window to alter history? Absolutely. But we're manipulating nature in its most fragile state."
— Dr. Lyndsay Bryce, on Time Travel
Advertisement:

A Pilot Movie (for a series that was never picked up) that aired on Syfy channel in 2013, Rewind follows the time-traveling exploits of two CIA field agents and a civilian scientist who travel to the 1920's in order to preemptively avert a terrorist attack in the present day.

After a devastating nuclear attack on New York City by embittered Nobel Prize winning physicist Benjamin Rourke, the trio of Dr. Lyndsay Bryce, Sean Knox, and Danny Gates are brought together to make use of untested time-travel technology to prevent the attack. The technology generates unpredictable windows to seemingly random dates and places in the past — and a new window leading to the Washington DC of 1929 has just opened up. With less than 24 hours on the clock, Mission Control and the Token Trio of heroes must work quickly to figure out who (if anyone) and what (if any events) they can influence (in the very narrow window of time they have) in order to change the future.

If they succeed, they may be able to avert a tragedy that took millions of lives. If they fail, they'll be stranded in 1929.

The show was never picked up for a series, leaving viewers to wonder what would become of the heroes after an ominous, open-ended Sequel Hook in the last five minutes of the film.

Compare with Timeless, a series with a near-identical premise that released three years later (and avoided the chopping block three times!)

Unmarked spoilers below; proceed with caution.