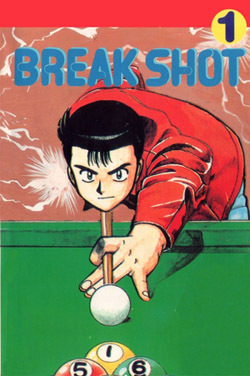 The start of the academic year sees Asako Hayakawa as a new Student Council President, and it falls to her to write up club budgets for this year. As she made rounds through the school checking up the clubs, she met with Shinsuke Oda, the only member of the billiards club. Stating that he won't get any budget this year, Asako is quickly invited by Shinsuke to a show of his skills in a bid to get people to join his club...

Break Shot (ブレイクショット Bureikushotto) is a Japanese Shounen manga series by Takeshi Maekawa (of Tekken Chinmi fame). It ran in Kodansha's Weekly Shounen Magazine from 1987 to 1990, and collected into 16 volumes of tankoubons.