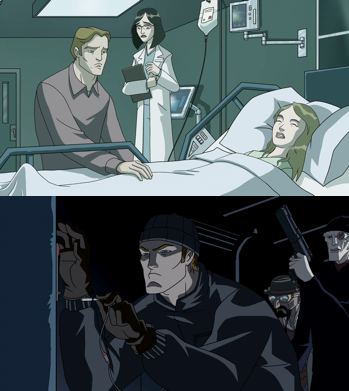 "Thug life, thug life, I gotta do what I gotta do!"
"You didn't really want to join the Black Order, Suman… you chose to become an exorcist to pay for a treatment for your daughter's rare disease."
— Allen Walker, D.Gray-Man
Advertisement:

In countries where the healthcare sector is mostly or entirely run for profit, as a result of very poor or non-existent universal (publicly-provided or state-monitored) healthcare, healthcare providers and insurers prioritise profit generation over the survival and wellbeing of the population.

Poor healthcare systems kill and ruin the lives of actual people, but are great fodder for the Rule of Drama given that working- and even middle-class characters can be just one perfectly ordinary accident (foreign body, broken bone, lopped-off finger) or medical condition (myopia, 'flu, diabetes) - let alone Soap Opera Disease - away from being completely bankrupted or dying.

Saving themselves or a dying family member/lover/friend is a great motivation for a character to do (morally questionable) things that they otherwise might not, especially if money-grubbing private hospitals refuse to treat people without insurance unless they're paid cash upfront (this does actually happen, sadly). Whether it's working themselves to the bone, getting indebted to shady characters, participating in gladiatorial blood-sports, being a mercenary/hitman, selling their body, or plotting a Bank Robbery - love can inspire them to do all sorts of unusual things.

Related to Billy Needs an Organ. Often overlaps with Justified Criminal when said character engages in morally dubious, illegal, if not outright criminal acts. Related to Littlest Cancer Patient, Delicate and Sickly, Incurable Cough of Death, and Soap Opera Disease. See also Signed Up for the Dental for a more personal version. Compare Working for a Body Upgrade and Saved by the Phlebotinum.