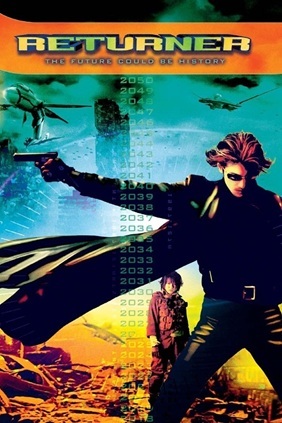 The Returner is a 2002 Japanese science fiction/action film.

It involves a mercenary named Miyamoto (Takeshi Kaneshiro) who finds himself helping a girl called Milly who came back in time from the future to prevent humanity's destruction at the hands of aliens.

Miyamoto meets her by accident when he shoots her while trying to kill Mizoguchi, a member of The Triads who killed his best friend years before to sell his organs in the Black Market. Luckily, she is saved from the bullet by a piece of metal she was carrying in her pocket. When she tells her story, he doesn't believe her, until she shows him a future device that allows her to move fast enough to dodge bullets. Then she gets him to help her to find an alien who will summon the rest of its kind to Earth.

They find it in a scientific research facility, but when she realizes it doesn't look like the future invaders, she hesitates in killing it, which allows Mizogushi, who found out about the hidden UFO, to steal the alien and the ship. Miyamoto and Milly must then work together to recover the alien before the space war can be triggered.

Tropes in this Film: