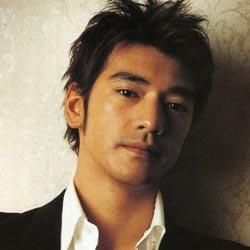 Takeshi Kaneshiro (金城武; pronounced Jincheng Wu in Chinese) is an actor of mixed Japanese-Chinese heritage (his father is a Ryukyuan from Okinawa and his mother is a Han Chinese from Taiwan). He is multi-lingual, as you might expect, and known for being a very handsome guy. As his father is Ryukyuan, the traditional Ryukyuan pronunciation of his surname is actually 'Kanagusuku' or 'Kanegusuku'.

Born in Taipei in 1973, he started a career as a pop singer in 1992, which he gave up later on in order to become a full-time actor. His first appearance on film was in Heroic Trio 2: Executioners, but his breakthrough role was in the critically acclaimed Chungking Express by Wong Kar-wai. He collaborated again with Wong on Fallen Angels in 1995.

Similarly to that of other Hong Kong actors, his career has been prolific, with over 30 films since 1995. The more notable ones include House of Flying Daggers, Perhaps Love, K-20: Legend of the Mask,Dr Wai In "The Scripture With No Words", Hero (1997), The Warlords and Red Cliff.

In the gaming field, he featured as the protagonist of Onimusha: Warlords and Onimusha 3: Demon Siege.