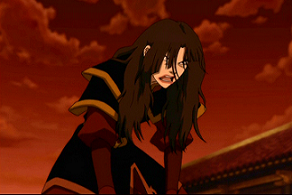 May be a symptom of advanced stages of a Villainous Breakdown.
Advertisement:

Sometimes, when a character is sufficiently angry and deranged, or just about to snap, they adopt this pose: head down, everything limp, lurching as if they were a marionette that's had its strings cut. Kubrick Stare, and inability to form coherent sentences optional. This is sometimes taken as the start of Unstoppable Rage — any character that dares to get close risks serious injury, especially if the character is also dragging a large weapon across the ground.

May also be that the rage is the only reason they're still standing if it's toward the end of an Unstoppable Rage and they're completely exhausted, not wasting energy on posture.