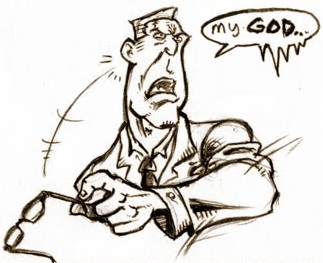 This event calls for a... DRAMATIC REMOVAL OF MY SPECTACLES.
"The only advantage to wearing glasses is being able to do that dramatic removal. [removes glasses] My God! Holy mother of God... I can't see a thing. Guess that's why I wear 'em."
— Jim Gaffigan
Advertisement:

A trope used extensively in B movies from the 50's and 60's. The capital-h Hero or scientist, to emphasize a point he's trying to make, takes his glasses off or puts them on before delivering a melodramatic line.

General Ripper: We must stop this creature before it destroys Topeka, Kansas!
Scientist/Expert: But you can't use a nuclear missile, General! (whips off his glasses) It's immoral!

This is parodied in modern productions such that the scientist will put his glasses back on and whip them off again with nearly every line. Also used to parody Soap Opera doctors, whose glasses always come off when delivering bad news to the patient. Another common gag is for someone removing their glasses to have an identical pair on underneath.

Authority figures like a Scary Librarian might look over the tops of their reading glasses, or carefully take them off, in order to give that person a more effective steely glare.

In Real Life, not many people with glasses whip them off after delivering a dramatic line, although some might remove their glasses if they spot something unusual due to presbyopia

, just to double-check that they're seeing correctly. Optometrists will warn against removing them with one hand as it could damage the frames.

A subtrope of Character Tics and The Take. See also The Glasses Come Off. Contrast Attentive Shade Lowering, which is a reaction to something someone else said or did.

A Glasses Pull should not be confused with an Ass Pull, it'll ruin your glasses.