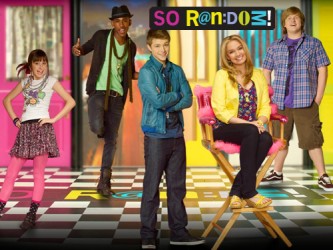 Sonny doesn't have a chance.
Advertisement:

So Random! (2011-2012) is a Sketch Comedy series on the Disney Channel. Only lasted one season. Technically, the third season of what once was Sonny with a Chance. In that show, So Random was a Show Within a Show that the characters were stars on and snippets would be shown in between the off-set plots.

However, Demi Lovato, who played Sonny, refused to reprise their role after the second season in order to focus on their musical career and resolve some personal issues. The show was retooled and defictionalized into its own show, losing the backstage plots and becoming a full-fledged Sketch Comedy show complete with special and musical guests.

The entire series is now on Disney+.

So Random provides the following tropes: