Film / Attack of the Killer Tomatoes! 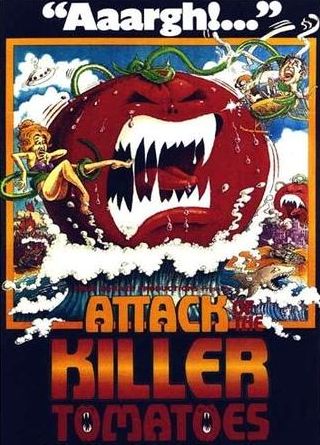 Tomatoes. You pickle them for your ketchup. You squish them for your tomato juice. You cut them to pieces and feast on their raw corpses in your salads. You treat them like vegetables.

But tomatoes are fruits.

And they're not going to take it anymore.

In 1978, a film was made spoofing B monster movies, in which tomatoes mysteriously gain sentience and mobility, becoming killer tomatoes, which then attack. It was, sensibly, called Attack of the Killer Tomatoes! No genre was safe as the self-billed "Musical-Comedy-Horror Show" ripped up everything from romantic comedies to spy films, pausing long enough to take pot shots at superheroes and politics. Despite being made for less than $100,000, it's generally regarded as a failure at the box office. It, nonetheless, earned a cult following and became, much like The Rocky Horror Picture Show, a defining example of a film that's deliberately So Bad, It's Good.

This would have been the end for the red menace (no, not that red menace), if it hadn't been for an episode of Muppet Babies (1984) using footage from the film to narrate a story called, "Attack of the Silly Tomatoes". It was a highly rated episode and New World Pictures (which owned Marvel Productions inexplicably decided the world needed a sequel and offered the creators of the original 2 million dollars to film one.

Return of the Killer Tomatoes! was released in 1988 and featured the same devotion to quality special effects, acting skills, and tightly scripted dialog as the first film: Still none detectable. Although it clearly does benefit from the increased budget, the film retains the original's tongue-in-cheek self-aware bad-movie quality, only now with more sex jokes. This film also introduces the villainous Mad Scientist Professor Gangreen, played by John Astin, who apparently enjoyed chewing on the scenery a lot as he returned for every subsequent sequel (and the Animated Adaptation, where his name was changed from "Mortimer" to "Putrid" and his title became Doctor).

The plot, such as it is, takes place ten years after the first film. Tomatoes have been outlawed! But, alas, the younger generation has forgotten the threat they pose, and tomato smuggling is at an all-time high. Chad Finletter, nephew of the hero of the Tomato Wars, has fallen for Tara, who serves the mysterious doctor Gangrene. Little does Chad know that Tara has a dark secret; she is secretly a tomato! Can true love bring peace to all, or will blood prove thicker than ketchup?

Any further description of the plot is probably unnecessary. You're either already overwhelmed with an uncontrollable urge to watch this turkey or pondering if its existence indicates western civilization is beyond hope. Possibly both. Would it help if we told you George Clooney was in it?

Return of the Killer Tomatoes! was a moderate success, and the executives behind it made the kind of decision only corporate executives can make without being deemed insane: What these two non-child-friendly films really need to follow them up is a Saturday morning cartoon (also done by Marvel Productions), on the fledgling Fox Kids Network.

Called Attack of the Killer Tomatoes!, but based mostly on Return of the Killer Tomatoes!, it tones down the sex and violence, ups the kiddy antics, and adds in a huge dose of satire to make it tolerable to adults. The result is stunningly watchable, which, sadly, also meant it would be Screwed by the Network. One notable feature of the series was the large number of Fourth Wall jokes, including the regular appearance of Censor Lady, the woman charged with keeping the show suitable for children. In one memorable appearance in the episode Spatula, Prinze of Dorkness, she demanded the vampire tomato that Gangrene had created to cease talking about biting and blood, and do something more wholesome to turn victims into vampires, such as kissing them... and guess who wound up as the first victim!

The first season was a spoof on movies, while the second had a plot for world domination.

While the animated series didn't last long, two further movies were made: Killer Tomatoes Strike Back! and Killer Tomatoes Eat France! An Atari 2600 game was an Homage to the film, called Revenge of the Beefsteak Tomatoes, and an adaptation of the cartoon released in 1991 on the NES