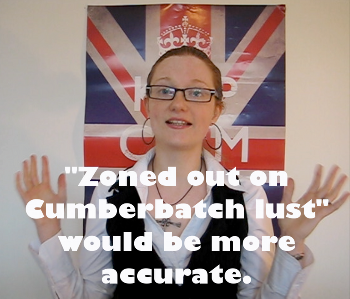 Fangirls. She is one.
Advertisement:

A Web Original show where redhead Sursum Ursa (real name Jill Bearup)note Sursum Ursa is Latin for "Bear up," waxes enthusiastic about books, TV shows and anything else that comes to mind, while the subtitles look on and snark.

Expect trope references and a lot of Sherlock.

. The show is also featured on The Agony Booth here

, and she was on Chez Apocalypse until the sites temporary closure due to Blip's shutdown. She joined Channel Awesome as part of the 2014 Talent Search, and left in 2018 as part of a mass exodus from the site.

In 2020 she retired the "Stuff You Like" series, and since then she has being making videos as Jill Bearup, mostly about analysing screen fight scenes.